It might sound like a bizarre science fiction term, but non-volatile memory is commonplace. And unless you printed this article, you’re probably using it right now.

NV memory isn’t a new concept; it’s been in use for decades to keep information safe. There are hundreds of different formats, but just a few that we use in almost every computing application.

So what is non-volatile memory?

I’ll describe what it is, how it works, and offer several common examples. That means that we’ll also talk about volatile memory, obviously.

We’ll also touch on up and coming tech that’s just around the corner.

Think of volatile memory like a chalkboard: once full, it gets erased and written over.

RAM, which is used by your computer and your smartphone, is a popular form of volatile memory. When you save your work, it’s transferred from the RAM to long-term storage.

Volatile memory storage is often terminated when it loses its power source. (Fortunately, modern devices tend to hang on to your volatile data a little bit longer.) 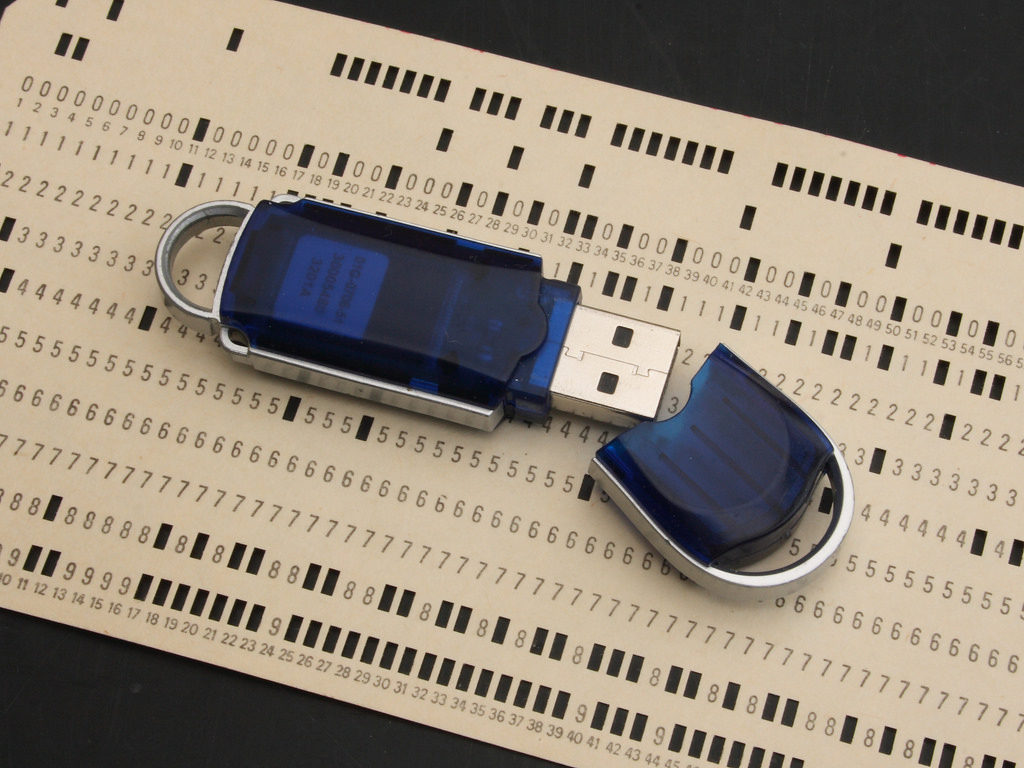 So if volatile memory is short-term, then non-volatile is long-term. Basically, it remains stored even without a power source.

Non-volatile memory is often known as ‘secondary storage’ because (in the way we use it now) we save our work, which transfers it from volatile (RAM) to non-volatile form (your HDD, flash drive, or SSD drive.)

Why do we use RAM at all?

RAM boasts an incredibly high data transfer rate. When we input data (from, say, a keyboard), it is written to memory almost instantly.

Hard disk drives (HDDs) are particularly slow. If we relied on HDDs for active data use instead of RAM, our computers and phones would run very poorly. Solid state drives (SSDs) are a lot faster, but RAM is still an essential part of most computer architecture.

Some Examples of Non-Volatile Memory

There are dozens of forms of NV memory, probably hundreds if we look closely. Here are a few common types:

It may seem funny, but punch cards are a type of non-volatile computer memory storage. When the program is written, instructions are ‘coded’ into the card physically. Obviously this is one of the least dense forms of information, and not very practical.

Most computers use HDDs; they’re an example of a non-volatile memory storage device that’s widespread. HDDs use a rapidly rotating disc that’s coated with a magnetic material.

Data is stored in 1s and 0s, but it can be accessed randomly and put back together. This storage method is fragile, but it offers good storage density. Also, HDDs are cheap as borscht.

CDs are often associated with music, and they’re not commonly used with computers anymore. DVDs are popular for storing program data and movies. Blu-Ray discs have even more storage space and are used for high definition movies.

All three are cousins of the HDD. They’re coated with a magnetic material and written by a separate recorder. They suffer from degradation over time, but they’re an inexpensive form of non-volatile memory that’s still very popular.

(And if you’re wondering, yes, those old cassette tapes in your vehicle glove box count as non-volatile memory too!)

The SSD is a very popular form of non-volatile computer memory, and it’s on the upswing for practical reasons. SSDs are more expensive than HDDs, but they boast great transfer speed, incredible informational density and low power requirements. As a bonus, they are durable because there are no moving parts.

The most common form of SSD is NAND-based flash memory, as found in USB thumb drives.

You’ll also find flash memory in your phone and MP3 player. Data is stored in individual cells arranged in many columns and rows.

Flash / SSD memory is pretty awesome, but it’ll eventually be replaced. So what forms of non-volatile memory will we use in the future?

Holographic memory looks incredibly promising, in a Star Trek sort of way, but it seems a long way off.

One of the coolest new forms of non-volatile memory storage is Phase Change Memory, or PCM, and it’s just around the corner. Well, it’s actually here, just not commonplace.

PCM is a new type of non-volatile memory storage that takes advantage of a substance called chalcogenide glass, which has some curious, advantageous attributes.

Chalcogenide glass reacts to heat and changes from a crystalline to an ‘amorphous’ state, where it has a drastically different electrical resistance. That can be leveraged to store information. You change the state by hitting it with a laser pulse.

In layman’s terms, PCM storage is potentially an upgrade over SSD. It can be written much faster. With SSD, entire blocks of data must be erased, whereas PCM can rewrite individual bits.

PCM can also store much more data in a smaller space, enabling it to be around half the size of SSD drives (which are already pretty darn small.)

There are a few. PCM memory is a technology still in development. It’s susceptible to temperature, and the production methods haven’t been ironed out yet, so it’s expensive to produce. With recent advances in solid state tech, it’s hard to say if PCM will hit the market at all.

IBM sees PCM memory as a potential way to move past the non-volatile / volatile pairing and into a storage system that’s faster and more robust, with fewer components.

What are some other non-volatile technologies you’ve heard about?